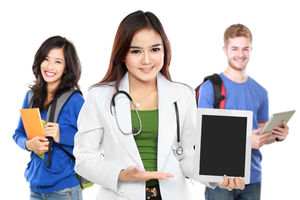 At GradReady, we don’t want to merely help you through the GAMSAT® Exam, UMAT® Exam and medical school interview; we want to give you a good overview of your entire medical career. As a part of this vision, I am delighted to write a little bit on the experience that I have had in my first few weeks as an intern, following my graduation from medical school in 2015. I hope that I can give you an idea as to what to expect as an intern- something that you really have little, or no idea about throughout medical school.

Having finished medical school at Griffith University, I began in earnest all of the various forms and orientation checklists necessary to finally be employed as an intern doctor and receive full time remuneration! I was fortunate enough to be taken on at the Prince Charles Hospital, an institute located on Brisbane’s north-side, and one of the premier hospitals in the country for cardiology. It was a nerve-racking experience to start here – I never had placement at a Brisbane hospital, I didn’t really know any of my fellow interns, the system and work processes were completely different to the Gold Coast hospitals I am acquainted with, and I had no opportunity to use any connections with senior doctors that I made whilst at Griffith.

I started my placement in Mental Health this year, and we started our employment with a half-week of orientation – which largely consisted of listening to more senior doctors discuss the positives of the hospital. I didn’t get off to a good start…. Falling asleep whilst the Consultant Director of the Emergency Department was speaking… which he not only saw, but pointed out, and then got angry and stopped his speech. Needless to say, I’ve avoided all interaction with him since.

If you have had experience in working in private companies in your past life, you may be quite amazed with the processes/support available to an intern doctor. Amazed in the sense that there is absolutely no such support. In my experience working in companies and firms, such organisation usually ensure you have a good idea as to what your job is, and support you enough to put up significant safeguards against your potential mistakes, lest profits are lost. However, at the junior doctor level, you don’t really get any kind of orientation, nor are you really given a thorough outline of what you are expected to do. Your consultant may stipulate to you on your first day, as mine did, what it is they exactly prefer you do for this thing and that, but such an orientation barely skims the surface of your actual responsibilities.

As I discovered after approximately 4 weeks on the job, the role of the intern is to make sure the vague instructions either scribbled on the progress notes, or whispered to you on ward rounds, by your medical seniors are actioned completely by you. There were many times in those first few weeks when such orders were penned, and as no one mentioned to me what my actual responsibilities were, I simply regarded most of these requests as some other, unnamed, persons’ chores. This overall role is complicated significantly by the horrendously out-dated use of archaic hard-copy records, the fact you don’t know who you need to talk to about arranging anything, and that there are no materials provided that even begins to address your role and responsibilities on the job.

However, despite all of this frustration, there are shiny glimmers of hope that pushes you on during work and which I have experienced (apart from being attacked by psychotic patients and having to prevent suicide attempts, of course) in these 12 weeks of work. It might be the hug from a patient in clinic, or patients who have much more significant life experience actually respecting what you have to say, or even the overtime pay – these little moments are ones that get you through the day – which can be pretty tough at times!

The overall wrap-up of the start of the intern year is that you shouldn’t expect to do a lot of ‘medicine’; most of your role is entrenched in paperwork, being frustrated with unnecessarily inefficient processes, and being asked to perform a range of menial tasks. However, it is still an amazing feeling to be finally out of medical school, having a respectable job, earning a wage, and making a positive contribution to society!

I’ve just started my cardiology term, which is both exceedingly busy and has worked to really emphasise the points I have made above in a big way – there are many more processes and procedures to be aware of here, and even less of an orientation than in mental health! Until next time, happy GAMSAT® Exam preparation, happy studying and best of luck!