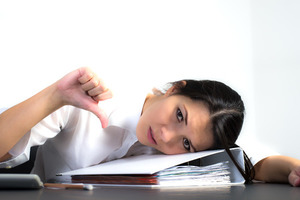 Medical school applications - How to cope with rejection

No, this isn’t my version of a Dear Prudence column, but seeing as I wrote about what to after receiving an offer last week, I thought it would be prudent (it wouldn’t be one of my blog posts without a pun) to also write about what to do if you didn’t get and offer.

Any rejection stings but I think that a rejection at this stage – after sticking it out for the entire year and dealing with all those periods of limbo, getting this close only to miss out – does sting a little more.  It’s normal to feel disappointed, angry, upset and hard done by so just give yourself a little time to deal with the crappy parts of a rejection.  But once you’ve done that, you need to dust yourself off and reflect on the past year.

I know it’s annoying when you miss out on something and people say “but to get this far is an achievement in itself!” but believe it or not, people usually say that because it’s true.  Look at the cut-offs this year – GAMSAT's® Exam and GPAs were crazy high, and your mates with the incredibly, mind-blowingly amazing portfolios were missing out of interviews at UNDA and Wollongong.  So first thing’s first, believe people when they tell you that.

Secondly, have a think about what stopped you from getting over the line. Did you stumble at the MMI?  Or if you interviewed at Wollongong, because GAMSAT® Exam and GPA aren’t considered in final offer rankings, strong scores in those domains won’t make up for an average (of the candidates interviewed) portfolio and interview.  It won’t necessarily be obvious, but being able to critically evaluate your own performance will help for next year.  As part of this process, if you know people who successfully interviewed, see if you can pick their brains about how they performed while it’s still fresh in their mind.

Thirdly, contact the school you interviewed at and enquire about feedback.  Some universities decline feedback requests, but others are happy to provide feedback once the admissions cycle is over and things have settled down.  Even if it’s a generic comment about which component of your application was below average – at least you have a clue as to what you need to work on/compensate for with the other admissions criteria.

Lastly, if you haven’t already, think about what you are going to do next year – continue working/do honours/travel/volunteer/save up money – whatever it is, have a plan and ensure that you make the most of the next year so that your application is even stronger next time around.

Good luck for the year ahead!